A switcher is a device that allows a single display (an HDTV, projector, or computer monitor as well as audio speakers, amplifiers, subwoofers, soundbars, and stereo systems) to switch between different source media devices connected to it with the ease of switching from channel to channel or station to station. For example, a switcher allows an HDTV to switch between using a Blu-Ray disc player, cable box, Nintendo Switch, or Sony PlayStation 5 without disconnecting or reconnecting any of those devices to it.

In other words, while most HDTVs have two HDMI ports at most, the switcher allows it to have 4 extra ports or more for other devices. An RCA switcher is the audio equivalent of the HDTV example. It allows a speaker or stereo system to switch between audio for radio, TV, computer, or streaming device. With that said, what’s the best RCA switcher out there?

What is an RCA Switcher?

An RCA switcher, simply put, is a switcher with an RCA connection to allow a sound system to switch between different devices. It’s the opposite of an RCA splitter, which splits a source media signal towards different audio outputs instead.  Switchers aren’t only used for audio. They can also be used for A/V connections like S-video, composite, or component video (that also use RCA plugs) as well as High-Definition Multimedia Interface, (HDMI), DisplayPort (DP), and Digital Visual Interface (DVI).

An RCA switcher, however, is different from a splitter and a matrix splitter.

Here are the top 3 RCA switchers around ratings-wise taken from Amazon. Let’s decide through these comparative reviews which ones offer the best RCA switching features of the bunch.

The Panlong 4-Way AV Switch RCA Switcher is a 4-in-1 composite video switcher with L/R stereo inputs to boot. It’s the second-highest-rated switcher on this list. Actually, it has similar ratings to the E-SDS 8-Way AV Switch RCA Switcher, but it got more reviews so it wins. It specifically earned its high ratings due to its inexpensive price of about $13 to $16 (price will vary depending on region, availability, shipping and handling, and discounts). Its main appeal is that it’s cheap yet not low quality.

Among all the highest-rated switches, this is one of those that really work. There’s a consensus that it’s worth your money. There’s also a version available with 2 inputs and 1 output or a 2-way RCA A/V Switch that only costs $10. This RCA switcher is excellent for vintage media sources like if you want to connect your DVD player and VCR with RCA inputs to the TV that only has one RCA port. It’s essentially used by consumers as additional ports or port extenders. This way, you won’t have to unhook or remove your game console in order to play your VHS tapes or DVD discs.

It supports all devices with an A/V connection, it has a mechanical design so you can simply switch by button pushing, and it sports a metal enclosure to ensure your longevity and stability when push comes to shove. You also don’t have to install software drivers or an extra power supply to boot. In regards to its detriments, some customers are complaining about getting units that have the wiring crisscrossed or have the label wrong. It’s a quality control issue that’s bothersome because you just can’t have the video or audio switched.

As for the AuviPal 4-Way RCA Switcher, it’s the highest-rated switcher for good reason. It’s mainly used for Nintendo gaming consoles, which really racked up its score way up, beating out both E-SDS 8-Way AV Switch RCA Switcher 8 in 1 and the Panlong 4-Way AV Switch RCA Switcher. It’s the retro gamer’s switcher for those who have the genuine NES and SNES consoles instead of relying on a different switch, the Nintendo Switch, and its emulator system that allows you to play old games on your HDTV. The selector box gives you a more authentic experience that isn’t emulation or emulated on a newer system. 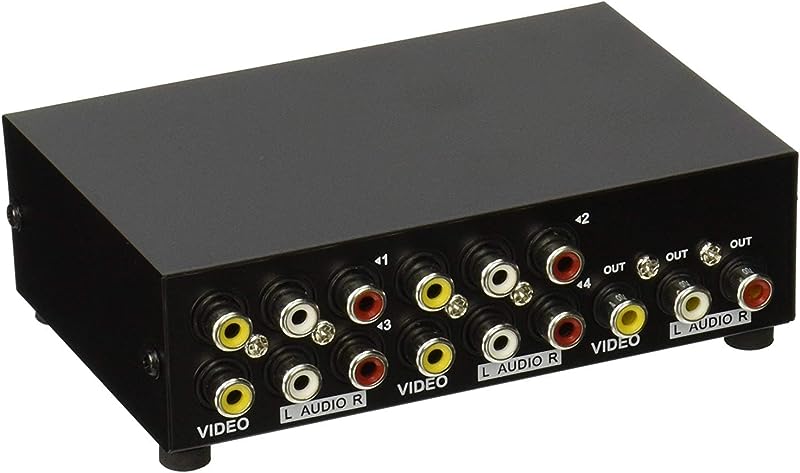 Like the Panlong, the Anvipal provides you with a means to easily switch from one device to another because it enables you to connect up to 4 video devices into one CRT TV or any TV with an A/V or composite video RCA output. It also offers the basic switcher feature of switching from different devices at a button push without unplugging any of your devices from the RCA switcher device. Instead of one RCA output, your TV now has four. As for what’s unique with Anvipal, its main claim to fame is that it has huge compatibility for many vintage or legacy systems, from consoles to players.

Emulation is never perfect but honest-to-goodness RCA connectors to an old CRT TV and old consoles from the Sony PlayStation 2 all the way to the Nintendo Entertainment System will give you a more genuine retro gaming experience without flaws such as lag and input delay from incongruous display devices. The device also supports DVD players, VCRs, VHS tapes, A/V connections for various other systems including a PC, and so forth. Does it work well with a converter, like putting a VGA to RCA converter into its RCA switcher slot? That’s probably not a good idea since the more converters you connect the more data loss happens.

Last but not least is E-SDS 8-Way AV Switch RCA Switcher. It’s different from the other switcher because it doesn’t only connect 4 devices into one CRT TV. It can connect up to a maximum of 8 devices. Normally, you’d think this is enough to make it the best switcher on this list, but ironically it has a customer review rating similar to that of the Panlong 4-Way AV Switch RCA Switcher and slightly lower than the AuviPal 4-Way RCA Switcher. Additionally, Panlong got more reviews than E-SDS. 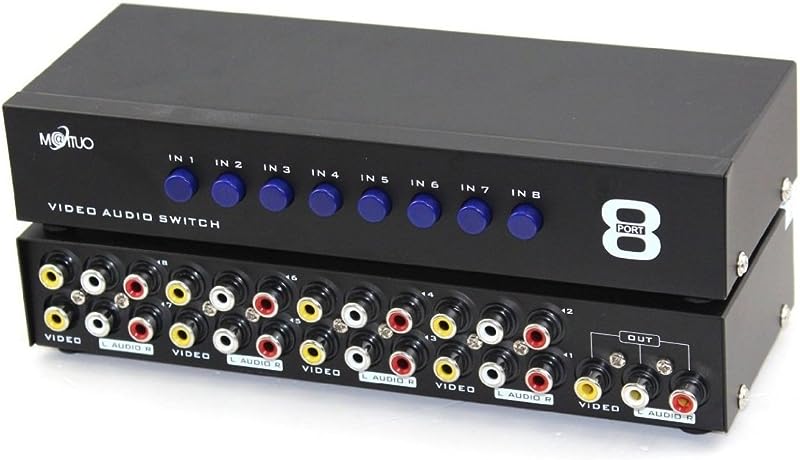 The E-SDS 8-Way AV Switch RCA Switcher is a lot less common than your average 2-way or 4-way switcher. It’s a heavy-duty switching device that does L/R audio and composite video (i.e., standard-fare A/V connections during the CRT era of television sets in the 1980s to the 1990s). It’s also a must-have for retro gamers interested in consoles like the Nintendo Entertainment System, the Sega Master System, the Sega Genesis, the Super Nintendo Entertainment System, the Xbox, the Nintendo 64, the Nintendo Game Cube, and both Sony PlayStation 1 and 2. As far as confirmed compatibility goes, AuviPal  is superior,

In regards to the reviews themselves, the E-SDS 8-Way AV Switch suffers from workmanship issues. At least one customer got a unit where the unit’s socket came out along with the cable quite easily. The socket is tension-fitted instead of soldered, thus there’s a chance of it coming off altogether. The external screws are also self-tapping and entered their slots at odd angles. It’s a quality control issue that ultimately undoes the advantages that the E-SDS has compared to the Panlong and AuviPal. All the same, it’s still an 8-way AV switcher that’s hard to come by and worth the money.

Since switchers allow one display device to switch between A/V, audio-only, or video only devices, they have many uses commercially. Historically, switchers have been used in home entertainment systems, security monitor rooms, control centers, multimedia meeting rooms, television sets, radio setups, and much more.

Regardless, based on scores and reviews, the highest-rated RCA switcher of the bunch in this article is definitely the AuviPal 4-Way RCA Switcher, followed by the Panlong 4-Way AV Switch RCA Switcher, and finally the E-SDS 8-Way AV Switch RCA Switcher. If you’re wondering why the 4-way switchers go higher marks than the 8-way switcher, it’s a case of simple is best. AuviPal gets the job done more consistently and Panlong is a good in-between middle-class switcher. You’re less likely to come across errors and malfunctions with fewer inputs, but E-SDS still came up with an excellent 8-way switcher regardless.