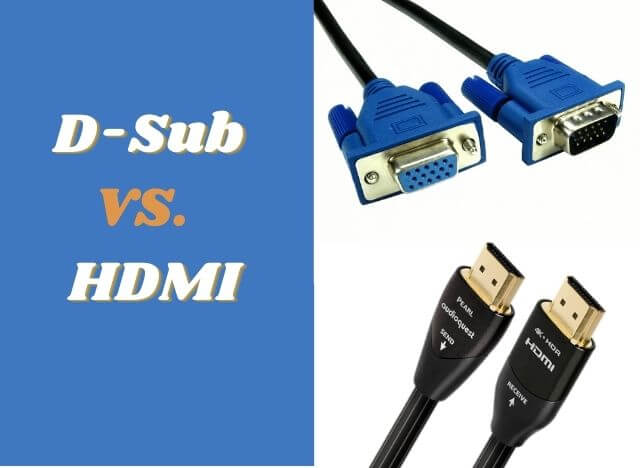 The comparison between HDMI and D-Sub are most relevant when it comes to monitoring connections. Many modern monitors come with D-sub (VGA) and HDMI inputs. Your graphics card, meanwhile, can have HDMI, DP, DVI-D, or DVI-I outputs. Should you err on the side of your graphics card and simply link up with the HDMI input for that HD action? Or should you go D-sub instead? HDMI is the obvious choice, but what can you get out of D-sub since it’s also an option?

So which is better? D-sub vs HDMI. You’d think HDMI is naturally better since it’s more modern or recent as well as more advanced, but let’s put it to the test through this article.

You may also like: A Guide on D-Sub vs. VGA

Here’s a comparison chart of how D-sub (VGA) squares up against HDMI. When used in the context of a monitor port or interface, the D-Sub port is basically a VGA port using the specific D-subminiature connector.

HDMI vs. D-Sub: Not Really a Contest?

It’s not even a contest. HDMI is in every way superior to a D-Sub VGA connection. HDMI from 2002 is superior to the age-old D-Sub VGA from 1987 because it can do Full HD 1080p and higher depending on what type of HDMI standard you’re using. VGA can do 1080p too any higher like 4K is pushing it.

HDMI can stream both video and audio in a single cable while VGA cables with a D-sub connector can only support video (there are separate audio cables involved). D-sub VGA remains an option in even modern monitors and laptops because it’s a legacy standard that remains perfectly serviceable even in 2020, especially in terms of PC monitors. Even to this day, there remain separate ports for PC monitors and sound rather than combining them like in HDTVs. But don’t be under the illusion that D-sub can in any way keep up with the current display standard of HDMI quality-wise.