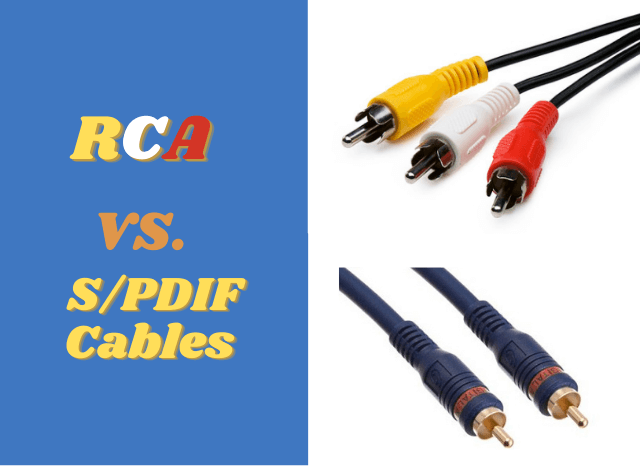 When you set up a home entertainment system or upgrade your surround-sound setup, the right type of audio cable matters. If you want truly the best, you should know what options are available, from analog to digital. In this article, take a look and find out – RCA vs. SPDIF – how are they different?

Are these two different from each other? RCA is an analog connection, while SPDIF is a digital interface. In this sense, the two are different. But they also have similarities, especially the coaxial SPDIF cable. For one, both coaxial SPDIF and RCA cables resemble each other in their connectors’ size and shape.

They can also be interchangeable since both have 75-ohm impedance as well as the same bandwidths. They are similar in this way, but coaxial cables transmit digital signals. Coaxial SPDIF can transport a 5.1 channel audio in a single line, which an analog RCA cannot. That’s another difference between the two connections.

To understand more, you can check out this video of audio cables. Or, you can read on to learn more about RCA and SPDIF cables.

What are RCA Cables?

The young ones might know HDMI and USB, but they probably aren’t familiar with RCA. At least, they might just know it by simple terms like the ‘jack’ used in speakers. But if you ask your grandparents or parents about it, they sure know what RCA cables are. An RCA cable is the oldest connection there is.

Although old, you likely have used it if you have ever hooked a DVD player or CD player to your TV. You just didn’t know that the three-colored cable is called RCA, which stands for Radio Corporation of America. It was the first company to ever developed RCA back in the 1940s. RCA can be both a component or composite video. 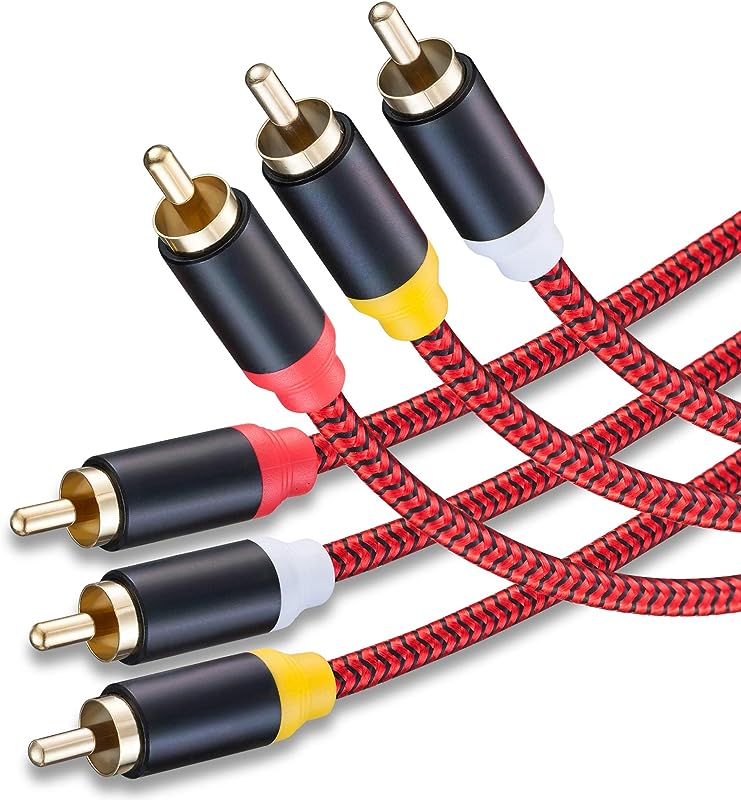 RCA is an analog audio connection that provides surround sound via multiple connections. The simplicity of its design and use is the main reason why it remains relevant today. After all, not everyone changed to HD sound. What’s more, legacy stereos and speakers still work using RCA plugs. RCA still works perfectly fine, but since they transfer analog sound, it has limitations.

Composite RCA transfers an analog audio signal with two separate cables. These cables transport the right and left stereo channels. Since it was first developed, RCA cables have been used in audio components of audio cassettes, CD players, and other audio devices. They also use it for the audio connection of video components such as DVD players.

With composite RCA, all the video data is compressed in one signal. Analog video comes with three separate signals carrying the red, green, and blue information. Because a composite RCA compresses all this information into one signal, the quality is somewhat reduced. It is one of the downsides of the RCA connection.

The most common RCA colors are red, yellow, and white. It is the RCA connection you will often see in basic household devices like TV and DVD player. They have three basic ports – two for analog audio and one for composite analog video. In analog audio, the red and white cables stand for the right and left speakers, while the yellow line is the composite video.

Component RCA cables are more sophisticated than composite. Sometimes used on HD TVs, this cable has three video lines instead of one. The wires are color-coded in red, green, and blue. As for the audio lines, component RCA also has two in red or white or black.

For the video lines, it uses red, green, and blue cables. Since it has two red lines, an additional color helps distinguish the right cable. You can also use component RCA for much higher resolutions.

RCA sounds fine if used with analog recordings. However, digital recordings end up somewhat degraded in some of its nuances when transferred using RCA. For this reason, you should use an HDMI or optical connection if playing digital content. Whether to use RCA, HDMI, or optical cables depend on your home theater box.

These are RCA cables, which are analog. There are also coaxial cables with RCA connectors, which is one method SPDIF is transmitted. On that note, let’s move this comparison of RCA vs. SPDIF along and learn more about SPDIF.

SPDIF or S/PDIF stands for Sony/Philips Digital Interconnect Format. It is a digital audio format for outputting audio over short distances in consumer audio equipment. This format connects digital components such as HDTV or Blu-Ray/DVD player to a surround-sound stereo receiver.

You use SPDIF for interconnecting components in a home theater as well as other digital systems. SPDIF is a 16-bit protocol for transmitting DTS multi-channel and Dolby Digital sound. It relays signal over either through a fiber optic cable using TOSLINK connectors or a coaxial cable with RCA connectors.

Digital audio differs from analog in that this signal is transmitted in an encoded series of 0s and 1s. With this, the audio has higher fidelity since no noise is included in the audio signal. It is why it is always better to transfer sound in digital format. Right now, you can transmit audio in digital format through two consumer-level interfaces.

These are HDMI or High-Definition Multimedia Interface and, of course, SPDIF. Between the two, SPDIF only transmits audio while HDMI includes digital video signals. That makes HDMI more complete. But you would still need SPDIF since not all equipment and devices have an HDMI output.

As mentioned before, SPDIF is transmitted either over a coaxial cable or an optical one. With the coaxial connection, the connector is a mono RCA plug. You can easily differentiate it from other RCA connectors as it is painted orange. On the other hand, the optical connection uses Toslink or Toshiba Link, a square connector.

A piece of equipment can have just one SPDIF format, but most has both for the greatest flexibility. But if the device you have do not have both RCA and Toslink plugs or there is a mismatch, you can use converters. These tools will swap the electrical signal of coaxial to optical and vice versa, making your equipment more flexible.

By now, you already know that the two SPDIF connections are coaxial SPDIF with mono RCA connectors and the optical SPDIF Toslink. An optical SPDIF cable is fiber optics and has two kinds of connector – the square one and the 3.5mm optical connector similar to a headphone plug.

Toslink is a fiber optic cable, so it uses only fiber optic or a glass/plastic material for transferring data. Toslink cables also come with Toslink connectors, the square one, or the 3.5mm plug, as mentioned. On the other hand, the coaxial SPDIF type has a coaxial cable plus an RCA connector.

A coaxial line is a copper cable that has an insulating layer along with a conductive shielding. Between the two, coaxial SPDIF is harder and tougher to handle with a more rugged appearance. The Toslink cable is more flexible and fragile since it is thinner. However, that also makes it easier to use.

Between RCA vs. SPDIF, you will want to use the latter if you want the best audio quality. But talking about other digital connections like HDMI, you must wonder when to use SPDIF. Well, you will likely use this interface when you want to connect two audio equipment since they probably don’t have an HDMI connector.

If the equipment does not support SPDIF, then a digital audio connection is not possible. You will likely have to use the analog connection through RCA cables. You also have to make sure both devices have the same connector – coaxial RCA or optical Toslink. If they are mismatched, you cannot connect them without a converter.

You can also use SPDIF connection in equipment with SPDIF and HDMI outputs when you only want the audio. For instance, you want to connect your PC to your home theater system to play music. However, you don’t want the video to be relayed. In that case, you use only SPDIF connection and not HDMI.

With a digital audio connection, you no longer have to deal with all the analog connection shortcomings. However, SPDIF also has its own troubles, although it’s a rare problem in modern devices. This issue is the digital jitter, which is a synchronization mismatch.

You can prevent this, though, by using a 75-ohm, 6-feet coaxial cable. This coaxial SPDIF can prevent jitter better than using shorter lines. You can also choose optical SPDIF, which does not experience impedance and length issues that can cause jitter. Even with a shorter cable, it can transfer data without any error.

After comparing RCA vs. SPDIF, hopefully, you can see their differences with each other. RCA is analog, while SPDIF is digital. RCA can be both audio and video, while SPDIF only transmits an audio signal. If you want better sound quality, though, then SPDIF is the better choice.