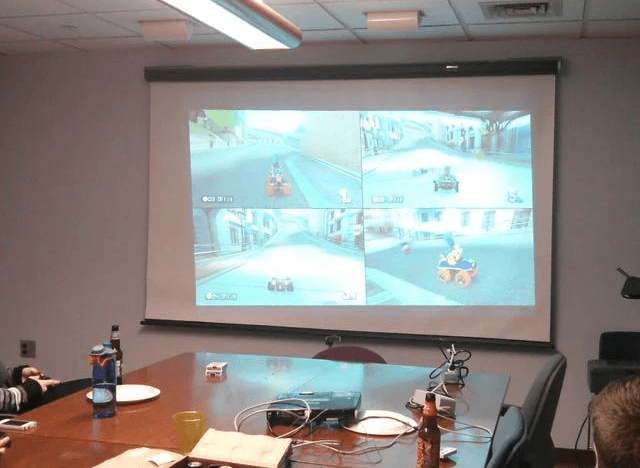 The Nintendo Wii is one of the best-selling consoles of all time. If you wish to know how to connect this device to a Wii for projector-based gaming then you’ve come to the right article.

It has finally happened. The Nintendo Wii, released back in 2006, is now considered old-school because it’s literally 15-16 years old in age now. “Old-school” gamers are familiar with the Nintendo Wii and its motion control gimmick.

On that note, let’s discuss how to connect Wii to the projector. It’s the most cinematic way for you to play Wii Sports or Super Smash Bros. Brawl for sure!

How to Connect Wii to Projector

Use a standard-definition projector—most likely an LCD projector—and connect your Wii to it using standard RCA A/V cables or a VGA adapter. Preferably, get a projector made around 2006 or so to have the right ports and connectors available that match those used by the Wii.

Because of the Wii’s motion sensors, you have to find a way to connect it to a ceiling-mounted or wall-mounted projector from far away to have it project your game on the projector screen while at the same time being within range of your Wii-Mote or Wii Remote to detect your motion.

You can go upscale the 480p resolution of the Wii to HD or Full HD by connecting the Wii to a modern HD projector with component cables and a component-to-HDMI adapter.

What is the Nintendo Wii?

In contrast, the NES is Third Generation while the SNES and Sega Genesis are Fourth Generation. Also, the Atari 2600 is Second Generation and the Magnavox Odyssey and Pong Consoles are First Generation.

What separated the Wii from the PS3 and the Xbox 360 is its built-in motion sensor controls and remote-like controller you’re supposed to wave around to allow you to play motion-based games.

The Best Way to Connect the Wii to Projector

Let’s say you decided to use an ultra short throw (UST) or pico projector with an HDMI connection for HD resolution projection for your Wii. For this, you’ll need a Hyperkin HD cable for the WIi.

Alternative Ways to Connect Your Wii to Projector

You can also use the Wii to HDMI Converter in order to connect the projector to the Wii. With the help of this device, you can easily connect any HDMI-based HD projector to your Nintendo Wii via an ordinary HDMI cable.

Can You Play the Wii on a Projector?

Sure. However, it comes with certain considerations and caveats to keep in mind. First off, the Wii isn’t HD. Nintendo at the time hadn’t taken the leap to HD and focused more on DVD-level quality of SD 480p. Many of its games are also fitted for CRT TVs. To wit:

How do you hook up a Wii to a projector?

A/V Cable Coupler and Extender or Short-Throw Projector: Using Extension Cables with the Wii’s A/V Cables: If your projector is further away than 8 feet or if it’s on the ceiling, you’ll need to extend its port or extend the connector of your Wii beyond that 8 feet of space by getting a video cable coupler and a second …

Can I connect my Wii to HDMI?

The Wii console is not compatible with HDMI. If you wish to view the Wii console with a higher quality image, component video cables can be purchased instead.

Can I play Wii on a projector?

Can you play Wii on a projector? Yes, you can connect your projector with the Wii. For that, you will need the Hyperkin HD cable or Wii to HDMI converter, or AV to HDMI adapter. All the above three things you can consider to use when your projector has an HDMI port.

How do you connect a wireless sensor bar to the Wii?

How to Set the Sensor Bar Position

Can you play Wii without a Sensor Bar?

What can I use instead of the Wii sensor bar?

Place two lit candles roughly as far apart as the sensor bar is wide. In your Wii’s settings, choose whether the candles are above or below the television just like you would for the sensor bar. Aim the WiiMote between the two candles and your pointer will respond on the screen like normal.

Does the Wii sensor bar need to be plugged in?

The Wii/Wii U sensor bar simply emits a set of infrared lights that the Wii Remote can detect. The cable that connects the sensor bar to your console is solely used to supply power; without power, however, the sensor bar will not function.

How do you hook up a Wii without the yellow cord?

There are two ways to connect the Wii console to these TVs:

What Else Do You Need?

After nearly two decades, many people still play games on the Wii or fondly remember playing the gimmicky but casual-friendly device. Shovelware aside, the best-selling console really did leave a mark in the videogame industry.