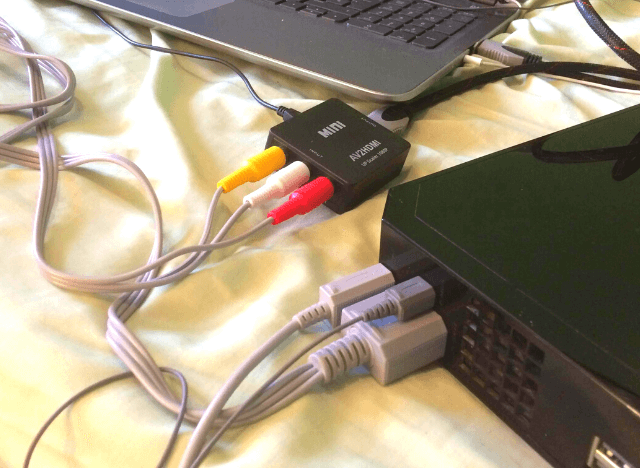 If you want to know how to connect the Nintendo Wii to a laptop or notebook PC as well as desktop PC, you’ve come to the right guide! You’ll even be taught to get the right Wii emulator to play Wii games with on your laptop as well.

Can you connect the Wii to a laptop? Sure.  Should you? Maybe so. You can play Wii games on the go by being able to connect your Wii to the laptop, provided that you can also plug in your Wii with its own battery or something.

How to Connect Wii to Laptop?

You can connect the Nintendo Wii—a motion-control-based game console released back in 2006—to a laptop by using a game capture card or device made for the Wii. The device turns the AV output of your Wii into a USB 3.0 one that a laptop can read.

It sometimes even comes with software that acts like an HDTV or CRT TV in order to display the Nintendo Wii home screen into a window you can enlarge into full screen. However, it’s usually easier to connect a Wii to a PC monitor using an AV to VGA adapter.

If you can’t get a game capture card or video capture device, the only other viable way to connect your Wii console to your laptop is through the Internet. Hear us out. A net-based connection allows you to do various things such as browse the net, run updates, and other online-based activity.

What to Expect out of the Nintendo Wii

The Nintendo Wii depends on motion controls to control the action on what you’re playing, whether they’re sprite-based or polygon-based games. By the end of Wii’s life cycle, it became notorious for gimmicky “shovelware” made to cash-in on the motion control trend.

The Wii catalog has topnotch games awaiting you in its catalog. The best games of the Wii make perfect use of the motion control feature, such as the amazingly popular Wii Sports. You can also play third-party games like Okami, Excitebots: Trick Racing, Rhythm Heaven Fever, and Dead: Overkill.

Connect the WiiMote to Your Laptop via Bluetooth Driver

Most assume that you need to buy Blue Soleil drivers in order to connect your Wii controller to your laptop. It’s actually more ideal to simply use your laptop or even a PC monitor as your HDMI-In display for your Wii so that you can keep aiming your controls at the Wii’s motion sensor.

Regardless, it’s actually possible to connect your Wii Remote to your Windows machine with standard drivers without needing to spend money on propriety programs. Here’s how you can go about it.

Play Wii Games on Your Laptop with Dolphin

Instead of connecting your Wii with your laptop in order to use your laptop screen as your Wii’s TV, you can cut down the middleman and just get the Dolphin emulate to play Wii games on your laptop. The program works or emulates the Wii console in app form.

The emulator works superbly as an open-source app that enables you to read the latest Wii games on your laptop or even desktop PC. It can even do things your Nintendo Wii can’t, which is to play your games at Full HD 1080p upscale instead of its SD 480p resolution.

The great thing about the Dolphin Emulator is that it has an easy and straightforward installation process for even the finicky Windows 10. It’s not technical and anyone wishing to play their Wii discs can do so on the comfort of their laptop and its DVD-ROM player.

Can you play Wii on a laptop?

Can I connect my Wii to my computer?

How do I get HDMI input on my laptop?

Can Wii plug into HDMI?

The Wii console is not compatible with HDMI. If you wish to view the Wii console with a higher quality image, component video cables can be purchased instead.

How do I connect my Wii to my laptop with HDMI?

Remove the AV cable from the Wii console back. Attach a Wii connector on the back of the Wii at one end of the adapter. Insert the USB plugin a free port on your laptop on the other end of the adapter cord. Switch on the machine and the Wii, then double click the drive for the adapter’s connection.

Can I connect Wii with USB?

Does Wii have a USB? The Wii console has 2 USB ports. … Please note that the Wii LAN adapter needs to be connected directly to the Wii console’s USB port or to a self-powered USB hub.

How do you plug in a Wii?

Can you use the laptop as a monitor?

Your laptop might use an HDMI cable, DisplayPort, mini-DisplayPort or include a docking station, so find the right cable for your needs and plug it into your monitor. Once that’s done, open ‘Settings > Settings > Display’.

Why don’t laptops have HDMI ports?

Unlike your ordinary monitor, your laptop isn’t designed to take in a video or HDMI signal for its display. Instead, your laptop can only transmit a digital signal to an external device through its HDMI output. That’s why your laptop has is a HDMI output. Many manufacturers do not put HDMI input ports on their laptops.

What is the USB port on my Wii for?

Rock Band on the Wii requires the use of the USB ports. You have to plug in little drum and guitar receivers into the back of the Wii to use the controllers. Also, the wired microphone plugs into one of the USB ports.

How do I connect my Wii without AV cables?

If you’ve been wondering how to connect your Wii to a TV without the AV cables, this is the answer. Just connect one to your Nintendo Wii, hook up a HDMI cable and plug it into your TV. View the output on the HDMI channel using Input Select on your TV remote.

How do you hook up a Wii without the yellow cord?

There are two ways to connect the Wii console to these TVs:

Does my laptop support HDMI input?

How Can I Tell if My Laptop is HDMI in or out? Generally, an HDMI-in port will be labelled as such. If your HDMI port is not labelled, then it’s a regular HDMI port and it’s only HDMI-out. There are devices that have both, but not on the same port, they have two separate ports, one for HDMI-out and one for HDMI-in.

What is the USB on the back of Wii console?

Here’s our list of eight things you might not know your Wii could do. At the back of your Wii there are two USB ports. Although Nintendo hasn’t really taken advantage of them yet (one game – Boogie – uses it to plug in a microphone), that doesn’t mean you can’t make use of them.

What cables does a Wii need?

Just connect one to your Nintendo Wii, hook up a HDMI cable and plug it into your TV. View the output on the HDMI channel using Input Select on your TV remote.

What ports does the Wii have?

The Wii console has 2 USB ports. Please use a commercially available USB hub (*) when connecting 3 or more peripheral devices, such as the Wii LAN adapter, a USB keyboard, the Wii Speak accessory and other peripheral devices at the same time.

Do you need a sensor bar for Wii?

The Wii remote’s accelerometer-based motion control works with or without the sensor bar. You can play games like Tony Hawk’s Downhill Jam and you won’t need a sensor bar to do it. But for titles like Red Steel or for procedures like aiming the bow in Zelda, well, that’s sensor bar territory.

What Else Do You Need to Know?

The Nintendo Wii console usually uses a TV as its display, You can also connect it to 2006-2010 era PC monitors and projectors with the right AV or VGA connectors included. If you’re traveling and you lack a TV, you can connect and use the console with a laptop.

You better have a battery or power source for the console to run on though. At any rate, you can connect your Wii to your laptop screen by a game capture card (turns the HDMI connection to readable USB), wirelessly by Internet, and an HDMI adapter.