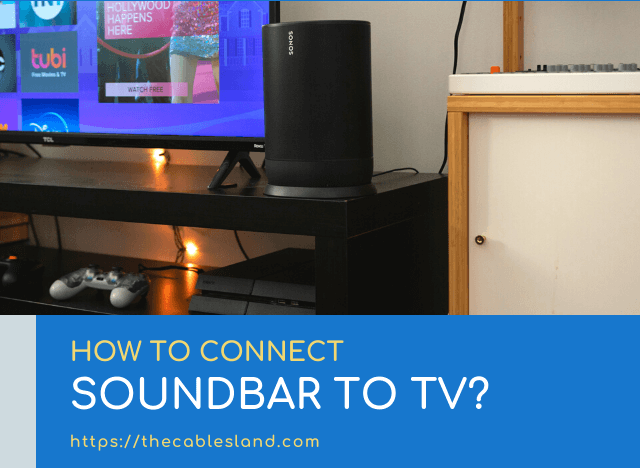 It’s simple to connect a soundbar to your TV. It involves connecting the bar to the television by HDMI, HDMI ARC, optical, Bluetooth, Wi-Fi, and so forth.

While TV picture quality seemingly improves on an annual basis—by the rate we’re going, we might reach feasible 8K or 10K giant screens worthy of an AV club or school amphitheater—the internal speakers of these ridiculously slim flatscreen panel TVs tend to not offer the best sound in turn.

Thankfully, this guide is here to guide you towards how to Connect Soundbar to TV. This way, you can have a Dolby sound system that gives these vivid theatrical images justice in more ways than one.

How to Connect Soundbar to TV

You can use either HDMI or optical cables in order to connect your modern TV to your modern soundbar. However, some soundbars have other means of connection, such as wireless Bluetooth or even Wi-Fi connection dependent on your Internet.

Of course, it’s also a different case when connecting your soundbar to a classic or vintage CRT (Cathode-Ray Tube) TV, in which case you needed a

The simplest way to connect is HDMI-ARC or optical cables. The HDMI Audio Return Channel (ARC) takes advantage of the fact that the HDMI cable delivers both audio and video in one cable as opposed to legacy A/V connections where the audio is separate.

On the flipside, you have optical cables that deliver digital sound from your TV to your soundbar but with the caveat that your TOSLINK or S/PDIF (Sony/Philips Digital Interface) is easier to damage or pinch due to the nature of the tech.

The Bluetooth wireless soundbar or speaker became quite popular around the time that home cinema or home theaters were all-in with the wireless home projector craze. It makes sense since the two made for a convenient tandem as far as cable-free home entertainment centers were concerned.

Bluetooth tech has advanced enough that even modern remote controls use Bluetooth signals instead of traditional infra-red. Then again, some speakers and soundbars instead use Wi-Fi technology in order to

Connecting to Legacy Media or Hardware

In order to connect to legacy media or hardware like CRT TVs, plasma TVs, or old-school flatscreens with an A/V or component video and audio connection with a modern soundbar, you’ll need some sort of converter or adapter. The most common you’ll encounter is the HDMI to A/V adapter.

It depends on the TV and what A/V connections it has. This can range from common ones like RCA Composite AV to more uncommon connections like the 21-pin SCART from France. You simply need an audio adapter to connect to the soundar’s connection (HDMI, optical, and so forth).

Is HDMI-ARC the Future of Audio Connections?

ARC has a higher maximum audio bandwidth compared to optical connections. It’s also supported by CEC (Consumer Electronics Control), meaning that TV remotes could also control the soundbar’s different features (volume and mute functions as well as power on and off).

HDMI-ARC also allowed TV makers to correct lip-syncing problems often see between the soundbar audio and TV audio due to the limitations of optical technology. There’s lag to be had and synchronization solutions became available with ARC.

The Nature of HDMI-ARC

HDMI cables from 2003 to 2009 only shuttled audio-visual data in one direction even though all of them transmit both audio and video in one cable. Therefore, if you wished to connect your soundbar or A/V receiver to a TV, you used an HDMI cable for the video and an optical cable for the downstream.

Enter the HDMI-ARC. It eliminated the need for a second connection by TOSLINK and other optical digital audio cable types. 2009-era HDMI cables allowed two-way communication over a single HDMI cable between TVs and equally equipped 2009 and above soundbars and receivers.

Not All are About the ARC Bandwagon

Not all electronics manufacturers went all-in with ARC. Some ARC capabilities were not adopted across the board. They instead awaited the introduction of the much better and higher-bandwidth eARC (Enhanced Audio Return Channel) protocol back in 2017.

They made lip-sync correction a mandatory feature with eARC and simplified the CEC setup even more. The full audio codec support became much more widespread. While ARC adoption was incomplete, eARC became a more common standard with its better benefits.

Which is Better? Dolby Atmos or DTS:X?

All the best 2022 soundbars for TV use tout their compatibility with DTS:X and/or Dolby Atmos. They’re spatial audio formats like the ones in the cinema that makes you feel like you’re in the middle of the action. Many TVs from 2018 and above support it.

Therefore, if you’re investing in an OLED TV or an Ultra 4K HD in 2022, you can get an accompanying Dolby Atmos or DTS:X eARC soundbar for it. However, which one is better? Atmos puts more emphasis on height (get the full experience with ceiling speakers0 while DTS:X is otherwise practically the same.

How to Connect with eARC

Just base your soundbar purchase on the available ports on your TV and you’re good to go. You need eARC for uncompressed 7.1 channel audio, high-bitrate audio like Dolby TrueHD and DTS-HD Master Audio as well as DTS:X and Dolby ATmos.

How about HDMI-eARC vs. HDMI-ARC?

The eARC is better than ARC because it’s the more recent version of ARC. As far as A/V data channels are concerned, you’ll get better audio with an eARC cable and eARC HDTV. The original 2009 ARC standard can be sued with nearly any HDMI cable.

By enabling CEC, you can control the soundbar with your TV remote control. However, ARC doesn’t support the more recent audio formats for surround sound.

How to connect the soundbar to the TV with optical cable?

How to connect the soundbar to the TV with HDMI?

To connect your soundbar to your TV, it mostly involves using the optical, HDMI, or HDMI-ARC connection. Sometimes, you could use Bluetooth and other times you can use the wireless dongle to establish a wire-free connection. Otherwise, it’s pretty straightforward.

Most modern TVs require HDMI cables because they have HDMI-ARC or eARC ports. Older HDTVs have A/V ports for component video with them but they emphasize HDMI connectivity. However, these older TVs also use digital audio cables because the HDMI standard used to be a one-way connection.