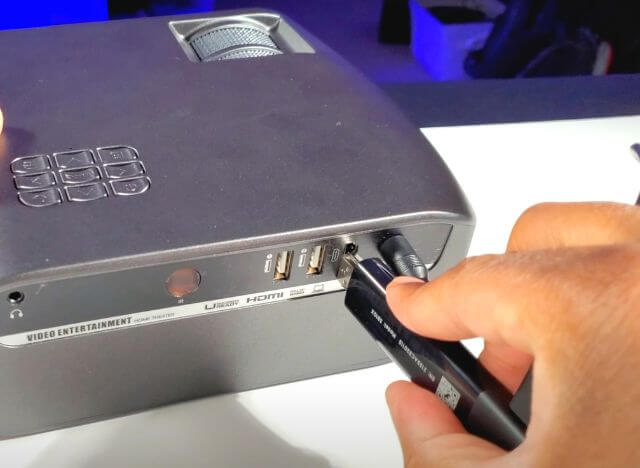 Instead of a smart TV or HDTV, you can use your Roku Streaming Stick, Roku Express 4K Plus, or Roku Ultra Box to connect to monitors and projectors. In particular, the projector gives what you’re watching a more cinematic feel to it since most cinemas use digital projectors too.

How to Connect Roku to Projector

Just do it like it’s Nike. It’s a fairly simple process. As long as you have a projector with an HDMI input, you’re good to go. Projectors with AV or VGA connections require adapters and downscaling though.

Hook up your Roku Streaming Stick or Roku Media Player unto the HDMI-In or input port of the projector then finagle its settings from the projector screen instead of on the HDTV. Only certain Roku streaming devices will give you a truly theatrical experience and wireless connection.

To be more precise, the Roku media with Wi-Fi Direct features include Roku Streaming Stick+ and Roku Express. They’re your best bet when pairing with a projector wirelessly. Since it’s HDMI, make sure you’re hooking up the HD Roku to an HD projector or 4K Roku to a 4K projector.

Why Some Roku Devices Aren’t Projector-Friendly

If your Roku Stick comes with an infra-red feature, then it’s quite hard to switch channels. You have to turn backwards and aim your remote from behind your couch or aim your remote overhead in order to control the stick. It’s much better to invest in Roku devices with Bluetooth remotes.

You can instead invest in an ultra short throw or UST projector in order to allow you to use your infra-red remote in a front-facing manner. This should enable you to change the channel, hit pause, or search for a new movie with ease.

Wi-Fi Direct Connectivity, on the other hand, enables users to place their projector far above or behind them while still controlling it while facing away. This is wireless control via Internet.

Why Use the Stick Plus or the Express 4K?

Aside from the Wi-Fi Direct Connectivity feature, the Stick Plus and the Express 4K are 4K-capable players so you can use them with 4K-capable projectors. This is the best when projecting movies and TV shows because 4K has so many pixels in them they cover a whole movie screen.

A smaller HDTV actually shrinks the picture but the picture in Ultra HD 4K resolution remains sharp and crystal clear instead of washed out like in lower resolutions such as Full HD (1080p), HD (720p), or SD (480p) as well as 2K and 1440p.

What If You Don’t Have Space from Behind?

Normally, you can plug Roku Stick or Ultra Box directly into your projector’s HDMI input port. If that’s not possible because of how it’s mounted on the wall or ceiling, you can opt for other options such as an HDMI adapter or splitter as well as a wireless dongle transmitter/receiver combo.

A premium HDMI cable can connect the devices together fine. You don’t need an adapter to connect the cable to your streaming stick or media player box.

How to Connect Roku to the AVR or Sound Bar

You can also add some high-fidelity sound to your home cinema experience by adding a sound system to your Roku and projector connection. Usually, it’s better to hook up the sound system with the projector to make things simple. Just plug the speaker or AV receiver to the HDMI-ARC port.

However, you can actually connect your Roku Player directly onto your AV receiver or AVR as well as soundbar. If your projector only has one HDMI-In port, you can switch the order and run it this way—Roku linked to AV receiver then linked to projector.

You’ll need to add some audio configurations and setting adjustments but they’re all worthwhile in the end to get that immersive cinema sound.

How to Connect Roku to Cable Tuner Box

You can add cable TV to the setup too. Just switch between the cable box and the Roku Stick/Ultra Box depending on what you’re in the mood for to watch. You can basically get an HDMI switcher to allow you to switch between media sources or use the AV receiver for that purpose. 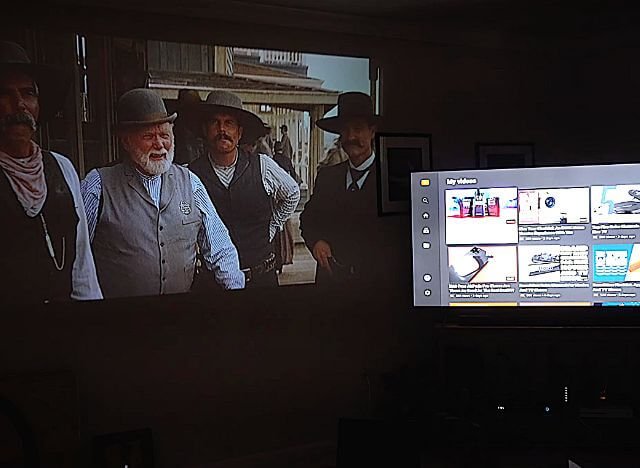 Roku projector no sound: How to fix it!

First, check your HDMI connection. If the cable is not fully inserted or if it is loose, this could be the reason why there is no sound coming from your Roku projector.

Next, try adjusting your Roku’s audio settings. Go to Settings > Sound and make sure that the volume is turned up and that you have selected the correct speaker type.

Finally, check the audio format of the media you are trying to play. If it is not in a compatible format, your Roku device will not be able to play it. If none of these solutions work, reset your Roku device.

To Sum It Up

If you’re not using Roku Smart TV as your Roku device of choice then you’re probably using Roku Stick or something like Express or the Ultra Box. This means that you need to connect the device to your HDTV or projector for it to work.

Connecting Roku devices to HDTVs is a breeze because Roku players have been designed to connect to pretty much any display device with an HDMI output. Otherwise, get the requisite adapter for VGA or AV for older projectors.