Home  »  Beginner Info • Converter   »   What Is The Best Component Switcher? 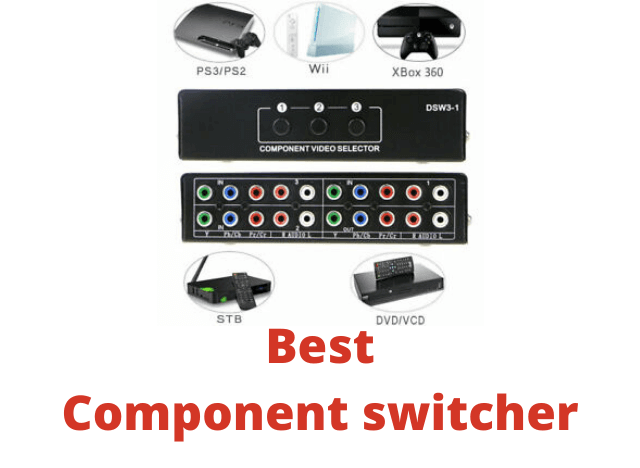 Component video, also known as YPbPr, is an A/V media standard that connects a media source (like a DVD player) to a display (like a television set). It splits up color information in three ways, hence it being also known as “Y”, “Pb”, and “Pr”. This standard specifically uses a “color-difference” signal variant, wherein it’s composed of Luminance (the “Y” channel, representing the image brightness), Red Minus Luminance (the “Pr” channel), and the Blue Minus Luminance (the “Pb” channel). A few adjustments to Pb and Pr values can also produce the green needed for an RGB display.

Regardless, the display standard is responsible for calculating the red, green, blue, and luminance values coming from the Y, Pb, and Pr analog signals. To go digital, you need to get a component video A/V connection with YCbCr instead.

Component video cables are often paired up with two stereo audio cables. The red and white plugs of component cables refer to the right and left audio of stereo audio.

You may also like: What is a Component Cable? Everything You Need to Know

With that said, what’s the best component switcher?

What is a Component Switcher?

Firstly, what’s a component switcher anyway? A switcher is the opposite of a splitter. They can be used for component video, composite, or S-video A/V connections of the analog-based past as well as the HDMI, DVI, and DisplayPort connections of the relative digital present. Historically, they’ve even be used in command and control centers, security monitor rooms, multimedia meeting rooms, and radio/television setups.  To wit:

Therefore, a component switcher 3-in-1-out is a device that allows any three devices that use component video + Audio cables to connect to a single display, like in the case of the Linkstyle 3-in-1 Out Component AV Video Switch Box allowing three devices (a DVD player, a Sony PlayStation 2, and a Nintendo Wii, for example) to link to your smart TV or component video + Audio so you don’t have to disconnect the DVD player to play Wii Sports or GTA: San Andreas.

What is the Best Component Switcher?

Here are our reviews of the best component switchers we can find and why Aobelieve DSW3-1 3×1 Component Switch Box is the best of the three.

We believe in Aobelieve. It does as advertised. It’s a 3-way component switch box that really does work when connecting a Sony PlayStation 2 and 3, Nintendo Wii, or Xbox as well as a cable box and DVD player to your TV. This way, you can efficiently play the Wii or the PS2/3 as well as the DVD player by switching from one machine to another, hence it’s being called a “switch” box. You don’t need to unhook one to use the other.

It goes about toggling between 3 machines through simple push-button switching. It has slots for every single device with 3 videos (red, blue, and green connectors) and 2 audio (left and right stereo) as well. You can pair up every cable to the right ports because of their color-coded molds that unify the different devices so they’re accessible on one screen, whether it’s your TV, monitor, or projector. Additionally, aside from foolproof pairing, it comes with a metal enclosure. This ensures that this switcher is built to last. 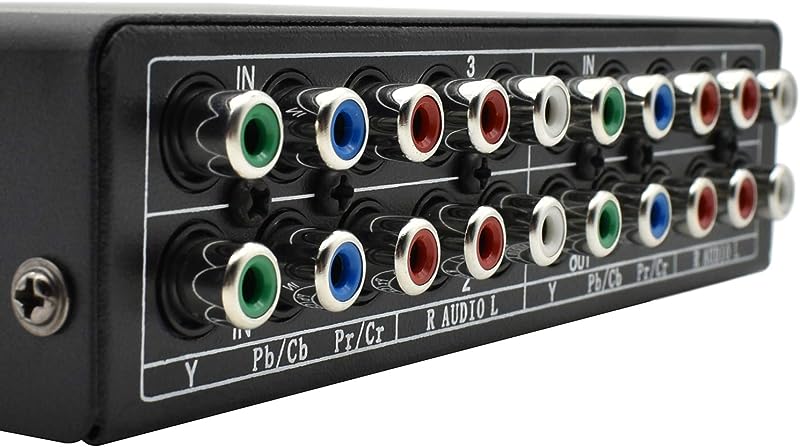 It’s also easy to operate and install. You don’t need to hook it up to an electrical socket or USB power charger. It doesn’t even need a software driver. It’s a box that switches between different devices when you’re using the component video ports of your TV or HDTV. It works because it doesn’t overcomplicate things, thus leading to flaws, signal attenuation, and other issues common with an analog connection. It’s mainly popular among all the retro gamers out there.

Aside from the NES and SNES or Genesis generation of consoles, many young adults love reliving their childhood and playing the Wii or the PS2 as well as PS3. It certainly helps that those consoles are among the top 5 best-selling home consoles of all time for good measure! There’s not much more to say since the Aobelieve has few flaws with like isolated instances of customer complaints from defective copies of it and whatnot.

As for the Linkstyle 3-in-1 Out Component AV Video Switch Box, it functions basically the same way as the Aobelieve does. It also offers a 3 RCA and 2 stereo audio AV cable connection that lets you switch or select component video source media so that you won’t have to do much plugging, unplugging, and replugging in case you want to play video games, watch cable, or satellite TV, or view your DVD or VCD discs as well as play early Blu-Ray. 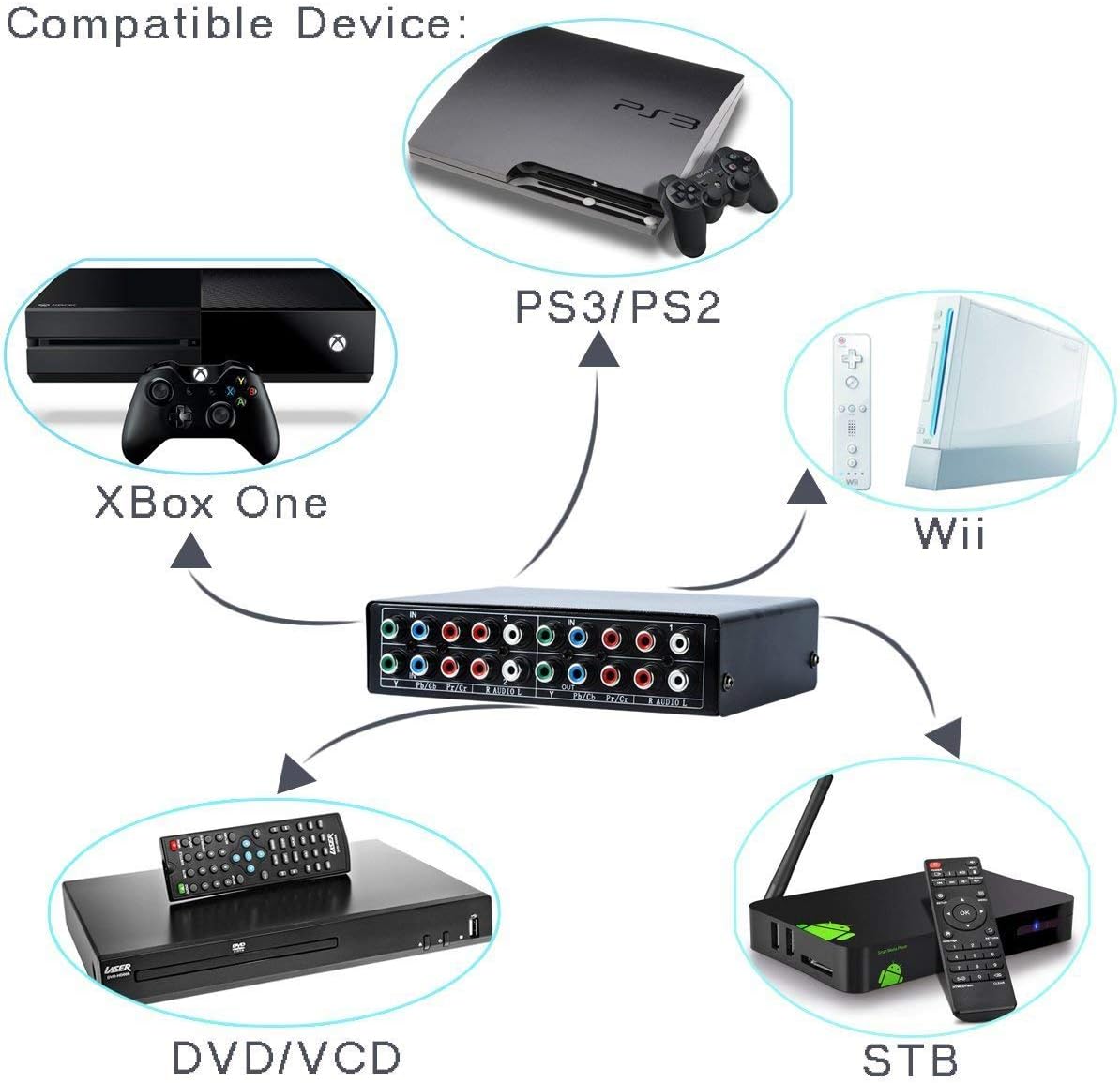 The Blu-Ray or BD part is mostly covered by the Sony PlayStation 3, which if you remember is a game console that doubles as a Blu-Ray player.  Thing is, the Aobelieve can also run the PS3 via its switcher setup like Linkstyle claims. What is it about Linkstyle that got it a lower rating from both us and from the consumers who’ve tried it out? Simply put, it over-promises and under-delivers. For example, most people outside of Southeast Asia ever played a VCD.

If you didn’t know, the VCD is the CD version of the DVD popular in the early 2000s in most of Asia for pirating movies. It never quite caught on in the west or toppled the VHS monopoly because DVD came along and offered much better quality video when push came to shove. However, that’s the marketing’s fault and not really a Linkstyle flaw. What is the flaw of the Linkstyle is having more quality control complaints.

Instead of serving as a worthy competitor or even clone of Aobelieve, the Linkstyle component video switch box suffers from more items that get glitches like the picture getting a green tint when used, but when you connect the device directly to the TV, the tint disappears. It also got lower user ratings due to false advertising, with it claiming to be an RCA switcher when it’s really more of a component video switcher, thus anyone trying to use it with a composite connection will find that it doesn’t work.

Last but not least is the ShinybowUSA Video and Audio Routing Switch. It gets higher ratings than the Aobelieve as a component video switch box mostly because only a few people have rated it. The ratings should even out to something comparable to Aobelieve as soon as more people buy it. Regardless, it’s technically not a switch box but instead a matrix switch box. It specifically allows you to connect 4 source devices into it so that you can link them to two display devices. 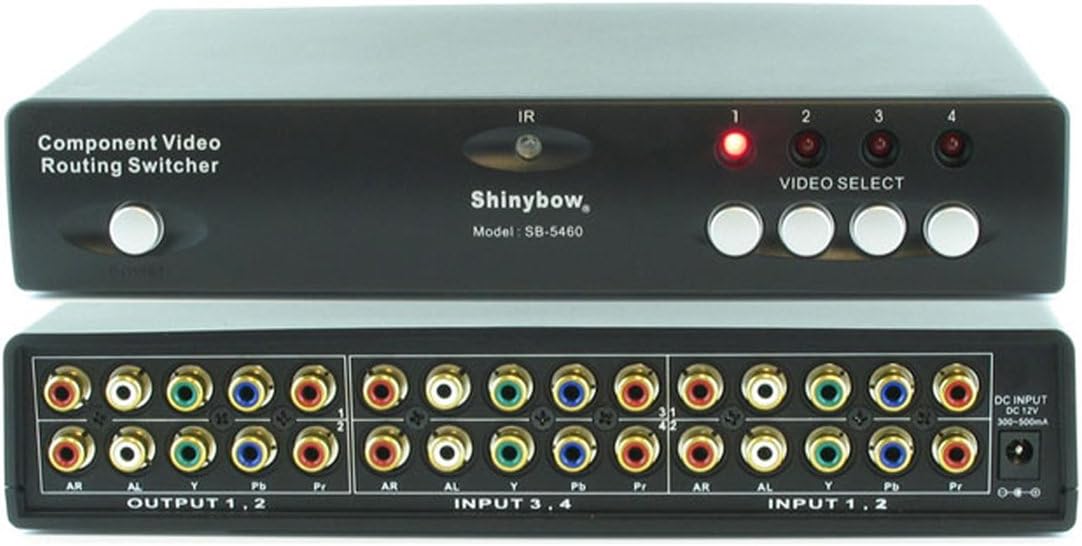 That makes it better, right? Unlike the Aobelieve and Linksys 3×1 component video switch boxes, you can instead avail of the ShinybowUSA 4×2 component video matrix switch box that’s capable of more complicated connections for your home entertainment system. For example, you can mirror displays on this video splitter that doubles as a switcher. However, can you play the PS3 on one TV while you watch a DVD movie on the other TV or projector?

No, you can’t. This matrix switcher mirrors the outputs. It gets minus points from us because as a matrix switcher it isn’t as good as a “real” matrix switcher. It’s more like the Aobelieve and Linksys switchers, but with an extra output for a display and an extra input for a source media. In terms of catering to more source media, it definitely does work better in that front. This way, you can now link to your one or two TVs a Wii, a PS3, a PS2, and an Xbox.

However, ultimately, we’re still siding with Aobelieve as the superior switch even though ShinybowUSA is kind of a matrix switch that belongs to a separate category. Sure, it works with panel push buttons and an IR remote and even comes with a rack for mounting. However, we’re more impressed with the consistent performance of the Aobelieve. If you want independent matrix switching, avail of ShinybowUSA’s Model SB-5470.

We believe that the Aobelieve DSW3-1 3×1 Component Switch Box is the best component switcher available based on our experience and the consensus of quite a number of consumers who’ve used it. It works more excellently than ShinybowUSA Component RCA Video + Audio Routing Switch and Linkstyle 3-in-1 Out Component AV Video Switch Box.

Why so? It exudes quality. It does what it promises or advertises to do, which is to route its A/V signal from multiple source media to a single display destination. YPbPr or component video formats might be obsolete for a good 10 to 15 years or so, but it’s still being used to the present due to how popular component-based devices remain to the present, as in the case of the retrogaming consoles Wii and PS2 (the second and first best-selling consoles of all time).