Home  »  The Cables   »   What is a Component Cable? Everything You Need to Know 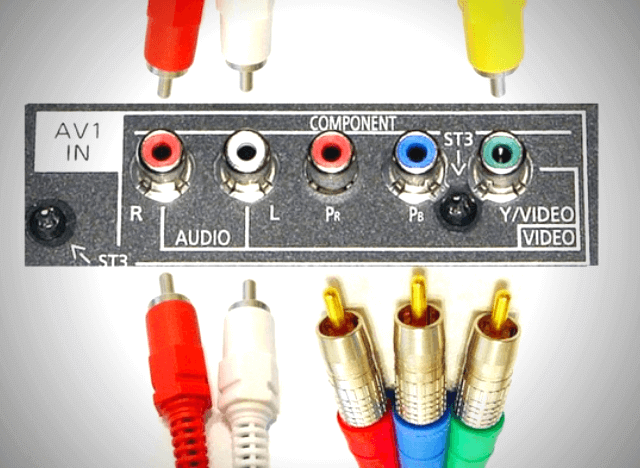 Before the dawn of fully digital high definition or HD entertainment in movies, television, and gaming, people were still using analog technologies like RCA or component cables. The component cable became all the rage in the early to mid-2000s as the highest quality media connection standard until HD took over. It’s so full quality it can even reproduce Full HD 1080i (interlaced versus the progressive scan of 1080p) resolution media although it’s mostly used for 480p resolutions more common in DVDs at the time.

Regardless, here’s what you need to know about the component cable and the component (YPbPr) media connection standard that served as the peak of component video A/V (audio-visual) technology.

What is a Component Cable?

A component cable is the type of cable used for the component video standard, also known as YPbPr. It provides the highest quality picture possible for A/V devices among all the analog standards that include composite video, S-video, and RCA cables. The component cable comes with three RCA-type connectors colored red, green, and blue (RGB). 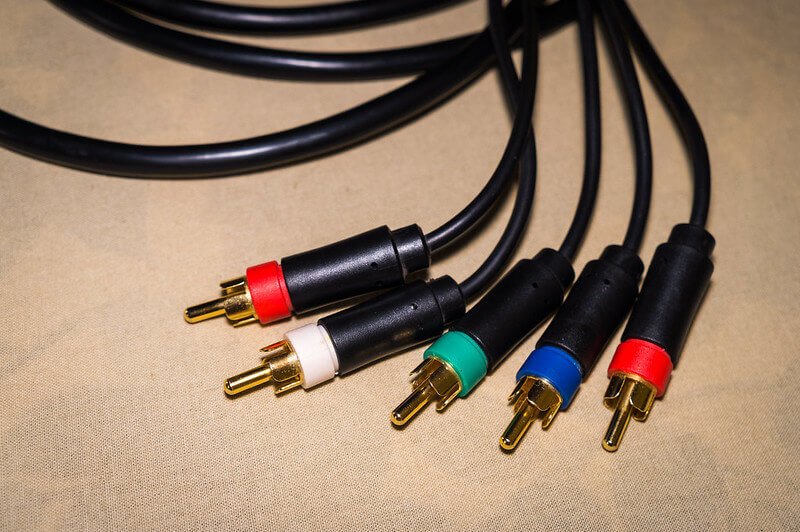 Here’s the definition of terms related to the component A/V standard.

Digital component video cables, for example, use the YCbCr color space instead. There’s also RGB component video technology used for SCART and VGA. Luma YPbPr component tech is just like the yellow video cable of composite video split into three more cables—one cable is for luma or brightness (Y) and the other cables (Pb and Pr) cover color information.

The same red and white plugs can be seen in composite video cables, with the yellow cable serving as the video cable. This is because component video can’t do audio. It’s not like HDMI that’s capable of delivering video and audio on one cable and plug alone. 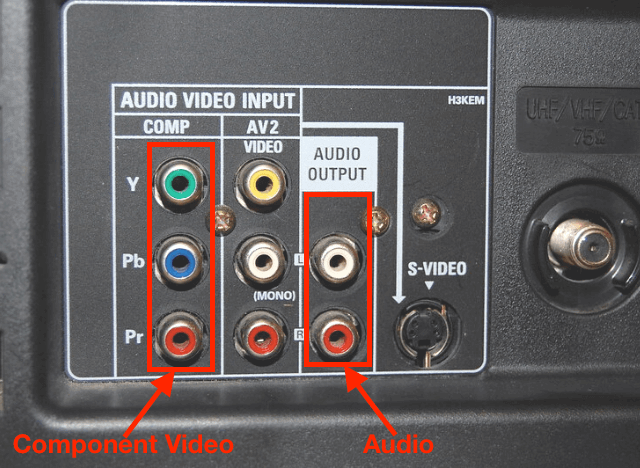 Digital component video that makes use of single lines/connector pins for digital signals allow higher resolutions such as 480p, 576i, 576p, 720p, 1080i, and 1080p. The digital version of the component video didn’t take off due to the release of the High Definition Media Interface (HDMI).

Copyright restrictions requiring High-Bandwidth Digital Content Protection (HDCP) approvals might limit HD images from going through this connection type. It doesn’t send audio signals but it does depend on separate stereo audio ports and cables. It can be split into 3 component channels, particularly Y, Pb, and Pr. 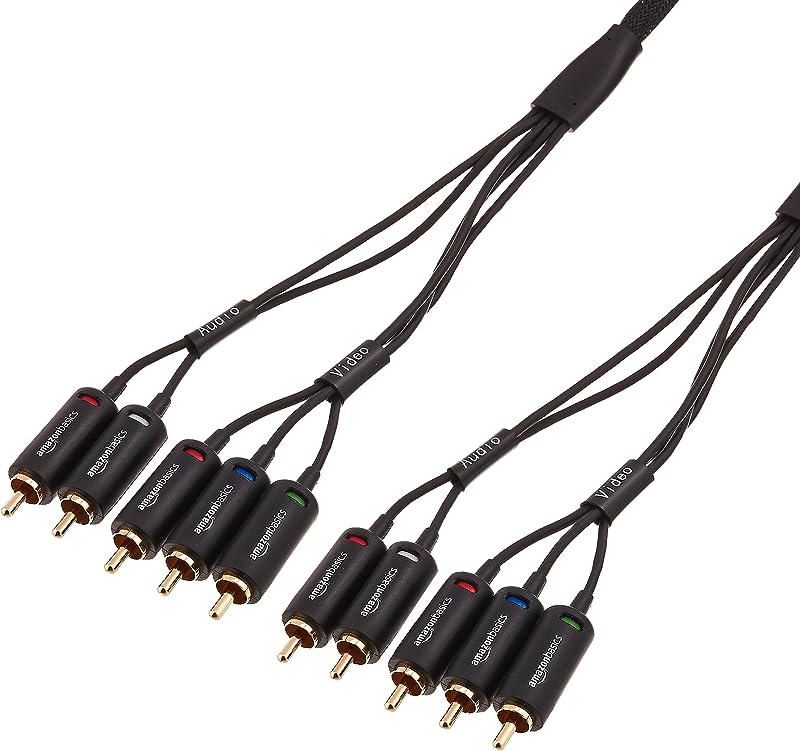 How to connect Component cables to the TV

Here are the things you need to know about component cable TV connections.

Also, get an HDMI to component converter cable then connect the HDMI end unto your TV or projector. Afterwards, connect the component plugs and audio plugs to their correct ports. Now you can turn on both your media source and your display device. 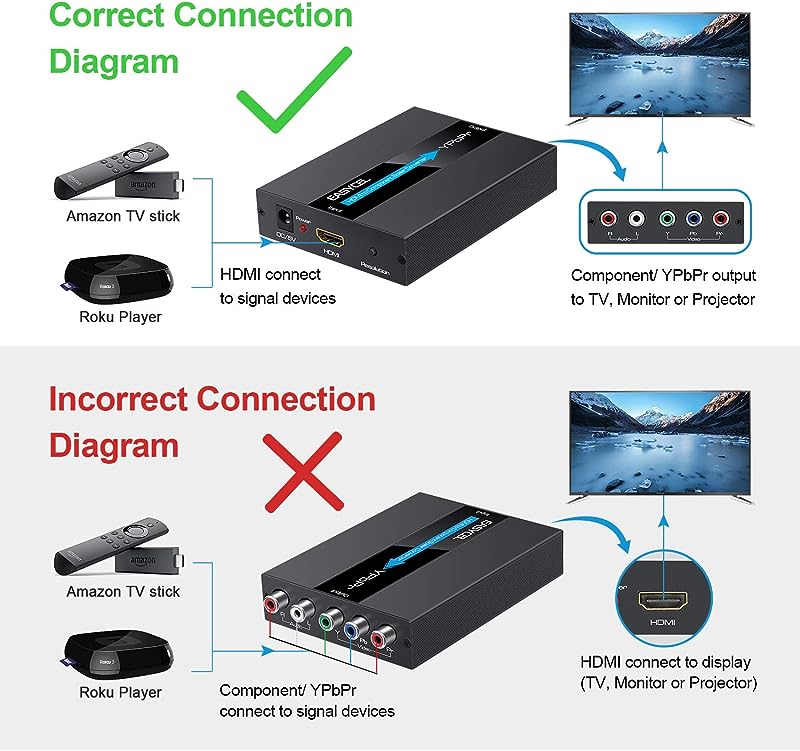 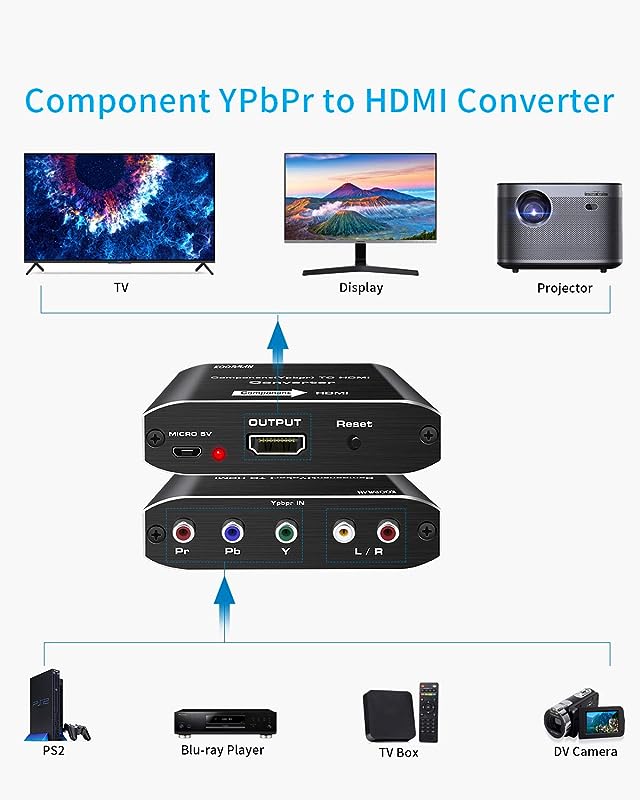 It’s able to unite 5RCA or YPbPr signals into a converted HDMI signal for 1080p, 1080i, 720p, 576p, and 480p. It supports 1080p displays at the HDMI 1.4 specification. It specifically can convert into HDMI game consoles such as the Nintendo 64, Nintendo Wii, Microsoft Xbox, and the Sony PlayStation 2, thus allowing you to play games at an HDTV display.

Can you combine component cables or port with non-component connections?

There are also certain monitors that can accept component connections over a VGA input connector using an adapter, such as the Dell U2412 with its OSD menu setting that switches from RGB to YPbPr. It requires a 480p or 576i resolution setting at a minimum though.

The Generic Converter in particular is capable of connecting a set-top box or DVD player with a YPbPr output to a DVI input display for newer projectors or monitors. This way, you won’t have to daisy-chain converters from component to HDMI to DVI. It supports the DDWG standard for DVI monitors as well.

Otherwise, a converter is called for. You can use Garo too by getting first a component switcher and connecting it to Garo then connecting it to your SCART switch.  Component to SCART conversions is mainly used for playing the PSP Go and Nintendo Wii on a SCART television set.

You can use the RGB component plugs to connect composite RCA connections together. The reverse isn’t true with RCA cables connecting composite video ports though. The white and red plugs are for audio and won’t have enough quality to transfer YPbPr.

The component uses sync-on-luma, which is like sync-on-green but the picture comes out all wrong. You can split luma three-ways and plug it into the RGB inputs but the extra load from splitting will result in a terrible picture. You still need a YPbPr to RGB adapter when all is said and done.

How does component compare to other A/V standards?

That’s 3 plugs for video and 2 plugs for audio versus 1 plug for everything. There’s also digital (YCbCr) component video with a digital color space that can reach 1080i and 1080p resolutions but it’s still inferior to the much more scalable HDMI format, which has reached 4K to 10K and perhaps beyond in terms of resolution.

VGA cables might have colors look washed out in the past but as it keeps up with the HD era of entertainment, they now produce vibrant colors while component is mostly an outdated standard.

Coaxial cables or three single RCA can also be used aside from component cables to hook up a component video connection as long as they’re all the same type and length. That’s mostly their main point of comparison, other than coaxial being superior to the R/L audio cables of a component video cable bundle for sound transmission. 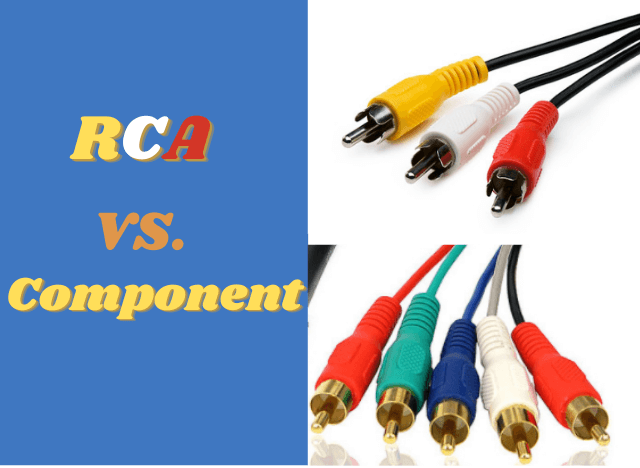 Additionally, RCA (composite) separates audio and video with 2 plugs for audio and 1 plug for video while component offers more sophisticated, higher-quality SD video with its 3 plugs for luma (brightness) and chroma (color info) as well as 2 plugs for R/L stereo.

The other plugs cover red and blue color separation as well as green. This is why when you hook up a YPbPr source media to an RGB display, you only get blue and green picture with no red info since the other port is sending luma signals instead. You need a converter to get a proper picture.

If you wish to get 1080p/i from component video, you need to switch to digital component video with the YCbCr color space instead. The component video ports used by most TVs can only reach 480i because their displays aren’t truly HDTVs nor even use progressive scan (they’re instead interlaced).

Frequently asked questions regarding component video technology is covered by this section.

Is Component as good as HDMI?

Can you use red white yellow cables (RCA) for component video?

Can component cables do 1080p?

Why is my TV black and white with component cables?

Can I use component video cable for audio?

They’re not supposed to carry audio. Use the R/L red and white stereo audio cables for audio purposes. The component video standard is strictly a video connection standard, unlike HDMI that can cover both audio and video in one cable.

Can you split component video?

You need a distribution amp in order to properly split a component video signal. Using products and services like Y-adapter can also split the signal but at the cost of poor picture quality, specifically with the luma or brightness greatly reduced. Do some online research on how to properly use a distribution amp for more details.

Can you convert component to HDMI upscaler?

You can. It’s possible to use component to HDMI converters to convert the signal from an older or vintage source media like a VCR to display on your HDMI TV. There are certain adapters and converters available on Amazon and the like that convert component video to HDMI, upscaling 480p/i to 720p, or even outright Full HD 1080p.

Component video is not always the best choice to use compared to HDMI even though it can reach 1080i HD since resolutions can now reach 2K, 4K, and all the way to 10K. This guide is here to discuss the pros and cons of this connection and when it’s best used when push comes to shove.

However, these cables are so ubiquitous and high-quality they were able to see usage up until the Sony PlayStation 2 and Nintendo Wii era of game consoles. What this means is that like RCA A/V cables, it’s not unusual for you to end up getting converters on or outright using appliances that have component video ports even in the 2020s and beyond.