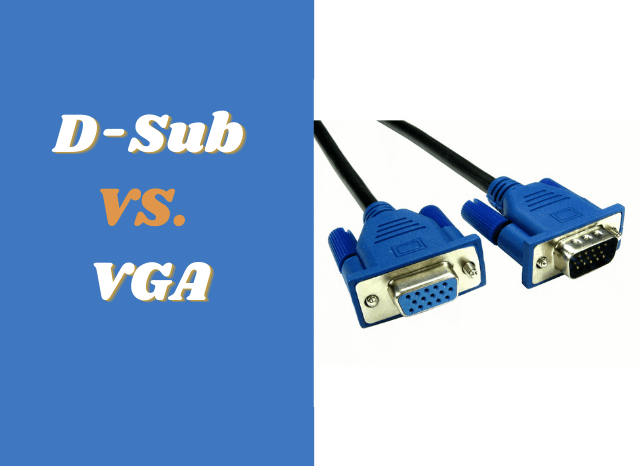 D-Sub vs VGA: Is it even a debate? Arguably, they’re the same thing. To be more specific, VGA is a video connection standard or A/V interface (more video than audio, to be honest) for PC monitors that make use of the 15-pin D-subminiature, D-Sub, D-SUB, or D-sub connector. To compare them is an act of disambiguating what they are, with D-sub a common electronic connector typically used for VGA, thus if you’re talking about D-sub for computer monitors, you’re most likely referring to a VGA connector or connection.

To reiterate, VGA is the A/V interface and D-sub is its choice of connector type common at the time of its inception (around 1987 by IBM for IBM PS/2 personal computers).

Here’s a comparison chart of all the major A/V interfaces controlled by different standards groups as well as the type of connectors they uniquely use, with Super VGA showcasing how its D-sub connector compared to HDMI, DP, and DVI connectors.

VGA and D-Sub vs. The Modern World of A/V Standards

To compare VGA and D-Sub with each other makes about as much sense as comparing a human with his own head or limbs. D-sub is part of what made VGA work even though D-sub is also commonly used for other purposes such as serial and parallel ports.

D-sub and VGA are practically synonymous as far as monitors are concerned but they’re not necessarily the same. It’s like comparing apples to oranges—the most you’ll get is that they’re related to each other but not necessarily comparable. It’s important to disambiguate them.

The VGA connector should be aptly described as the 15-pin D-Sub connector. It comes with various pin counts. RS232 serial ports use 9-pin D-subs, parallel ports use 25-pin D-subs, and VGA uses 15-pin D-subs. The name DE-15 for VGA D-sub refers to the E-size of the D-sub connector that houses 15 pins in three rows. Both the connector and the video connection standard work hand-in-hand to remain relevant in this new millennium, from VGA’s high-resolution capabilities for an analog connection to D-sub’s shielded hardiness.